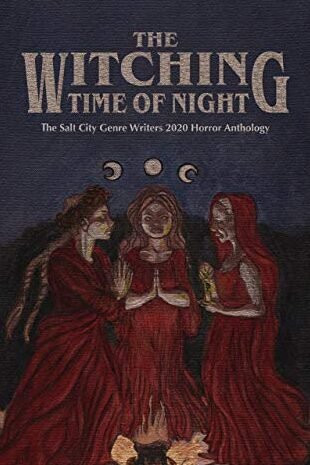 The Witching Time of Night

A man will do anything to save his daughter from death. A space-faring witch, navigating a starship, finds her true power. Two men make a deadly business arrangement. A new mother circles madness. Also: snorkel wasps.

Each story is written by an active member of the Salt City Genre Writers and explores what terror they fear in unique and fascinating ways. Take the plunge through the 17 stories collected here and learn what it means to be afraid.

A short story horror anthology by The Salt City Genre Writers, a chapter of The League of Utah Writers.

Jen Ellwyn wrote ‘The Figment’ in The Witching Hour.

Excerpt From The Witching Time of Night

Babies often scream and cry, though few people ever bat an eye. Even less think to wonder why. More commonly, it is custom for strangers to ignore the racket. But if those people knew the reason for the child’s screams… if they knew what sight the infant was helpless to endure… then surely they’d be screaming too.

In the central point of a bustling terminus, one such infant screamed. And screamed. And screamed. His head bobbed with his mother’s guided bounce, but he remained unconsoled by her warm shushes. After briefly resting his aching vocal cords, the baby lifted its head to look over his mother’s shoulder. A great heave of air curled and belted from his small lungs once more, and his eyes almost closed from the mighty pressure of his scream.

The child could still see it. He was the only one who could. And it only saw him.

The figment loomed at the other end of the great hall. Its eye sockets glowed hollow and white, burning with retina-piercing light as it bore an unyielding stare into the infant’s psyche.

To read more, check out The Witching Hour on Amazon.com

Where to Buy The Witching Time of Night

What Critics Are Saying

A great collection with some great talent represented. Some very chilling horror stories. A perfect October read. Or any time, TBH.
- Cody Haslem
I loved many of the stories within this anthology. I suggest buying it if you love ghosts and witches and all manner of things scary!
- Elizabeth Suggs
The book is abundant with fresh talent, Jen Elwyn alone is a well of originality, as her story explores the idea that there is a disturbing world within our own that only babies can see, which explains their bloodcurdling cries. In another is a grand witch with sharpened teeth and eyes as black as oil who leads her coven. There are recurring themes of life, birth and rebirth - most closely relating to mothers. Title font is reminiscent of such horror as The Omen, and there are tales that match Rosemary's Baby in style and tone.
- Dylan Butcher
What a cool and fantastic idea to band together a bunch of great authors and let them add their piece. I particularly liked reading "The Figment" by Jen Ellywn. I loved her style of writing and her description is very much on point. I was able to imagine things that I hadn't before with her description of demons and vision. I was fascinated and I asked myself after reading - perhaps babies cry because of things that we cannot see, but they can. There's a sense of having no control and muting the warning to merely a cry. There is nothing that any of the characters could do and the twist at the end made the hairs on the back of my neck stay up for five minutes longer. I'd recommend this book.
- Daniel Charles 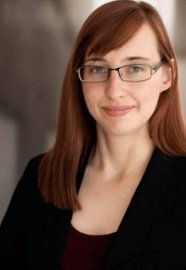 Jen is an emerging writer specializing in horror and fantasy.

Jen works as a freelance video and audio editor, film unit production manager, as well as a stage manager for theatrical productions.

Plus, you will get a FREE copy of my complete short story ‘The Figment.’